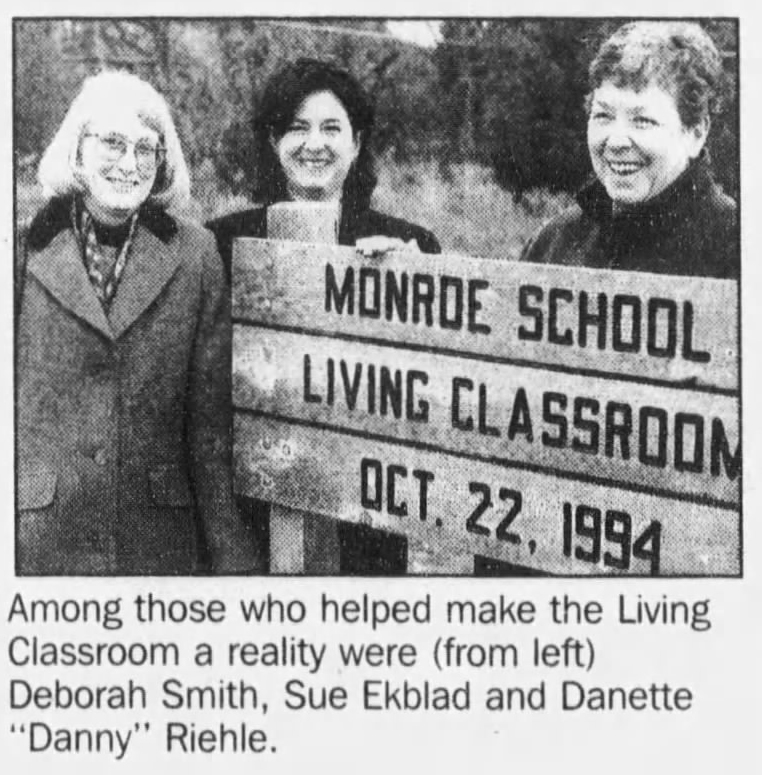 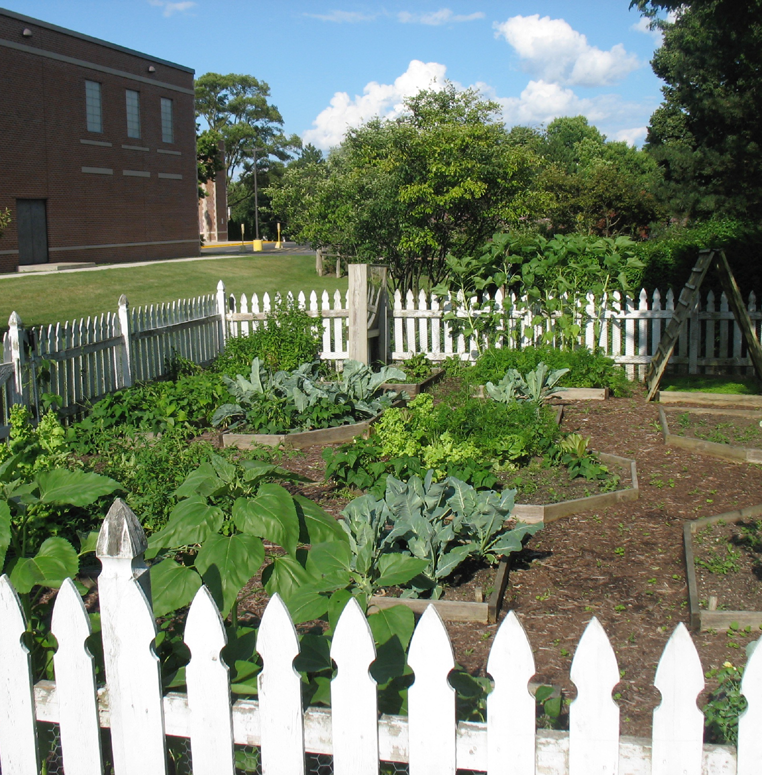 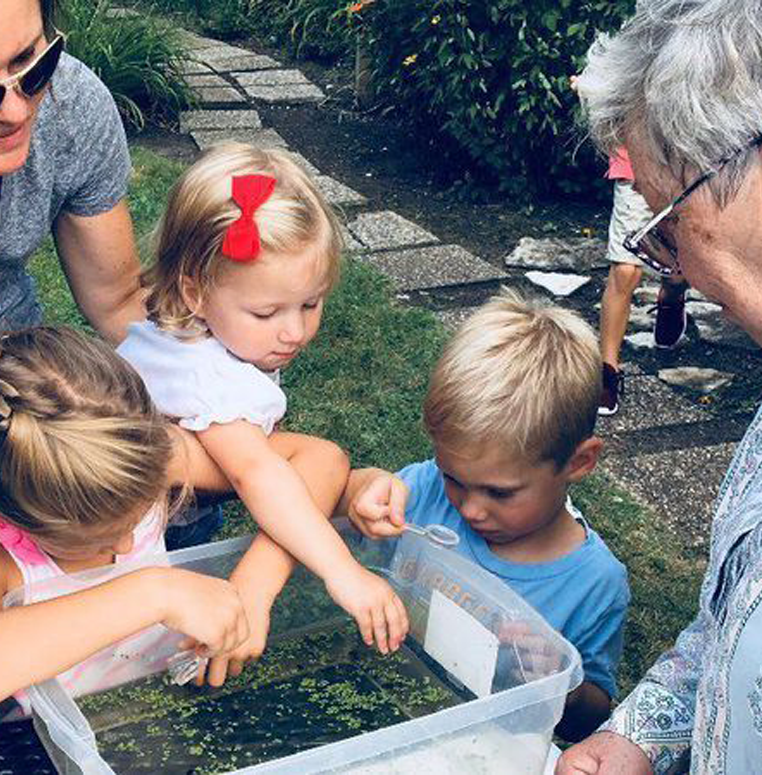 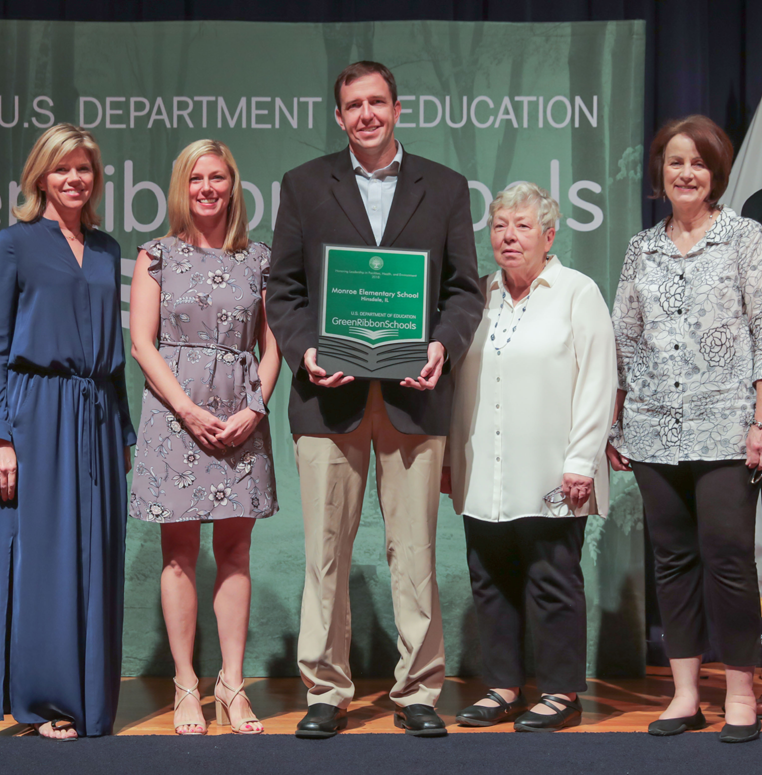 History of The Living Classroom

An Interactive Learning Tool for all Seasons!

During the summer of 1993, Sue Ekblad, a parent of Monroe School, and her family took a driving vacation to our East Coast. One of the many points of interest that they stopped at on that trip happened to be George Washington’s home at Mount Vernon, Virginia. There they found an abundance of gardens including George Washington’s Kitchen garden with its abundance of vegetables and fruits. On the way home, Sue started wondering if some of these gardens could be replicated on the school grounds and used as a “living classroom” for the children to learn about nature.

On her return home, she rejoined her neighbor Danette “Danny” Riehle, a fourth grade teacher at Monroe, on their nightly exercise walk. When Sue mentioned her idea, Danny thought it was a splendid one. Earlier in the year, Danny and her class had proposed to the principal, building a pond on the school grounds. On a field trip, the class had studied the ecosystem of a lake finding many microscopic animals and plants living there. Danny’s class wanted to be able to study these creatures closely.

They enlisted another neighbor, Deborah Smith, a city planner and member of the PTO. Working with Monroe’s Media Director, Maureen Miks, they began their work by researching what type of garden would enhance the curriculum at each grade level. Four gardens emerged from their study: a Butterfly Garden for First grade, a George Washington Vegetable Garden for Kindergarten and Second grade, a Prairie for Third grade, and a Pond for Fourth and Fifth grades. With expert gardening advice and suggestions about the best placement for the gardens from Kellie O’Brien, owner of English Gardens, Deborah Smith drew up the plans for the Living Classroom.

Once the actual building of the gardens began, parents, children, and teachers came together to do what was needed to accomplish this project. One of the parents showed up with a bull dozer to prepare the site for the gardens. Rota-tilling was done by teachers and parents. Children and teachers bought and planted a prairie plant when it was time to begin the Prairie Garden. One Sunday afternoon, two families, and a teacher arrived with shovels and determination to dig out the pond. Sometime during the course of the digging, an eight year old boy and his sister came with their shovels to help. With the community of Monroe School working together, the Living Classroom was evolved and a ribbon was cut on October 22, 1994.

From its conception, the Living Classroom was destined to be an outdoor laboratory for children to discover nature. Once they discovered it then they could learn all about nature, even some of its mysterious complexities. Once they learned about nature, then they would nurture nature, realizing the importance of our responsibility to nature.

During the next 18 years, children planted and harvested in the George Washington Vegetable Garden, hatched Painted Lady Butterflies into the Butterfly Garden, observed insects above and on top of the Pond, and helped in clean-ups throughout the year in the Living Classroom.

In the Fall of 2013, Danny Riehle presented a proposal to Justin Horne that would utilize the gardens more. Her proposal was to write environmental lessons based on the Next Generation Science Standards. As the lessons developed, it became evident that the Living Classroom was not only a classroom with gardens. It was a laboratory for learning and experimentation. As a result two new words were added to the original garden’s name. The collection of gardens became The Living Classroom Learning Lab were the lessons developed were taught.

In 2016, Monroe School became a National Blue Ribbon School. The Living Classroom Learning Lab was showcased in D.C. when the award was presented. Our gardens have been designated as “pollinating” gardens. We are a Monarch Waystation site.
In 2018, Monroe School was named a Green Ribbon School for its innovative efforts to reduce environmental impact and costs, promote better health, and ensure effective environmental education. 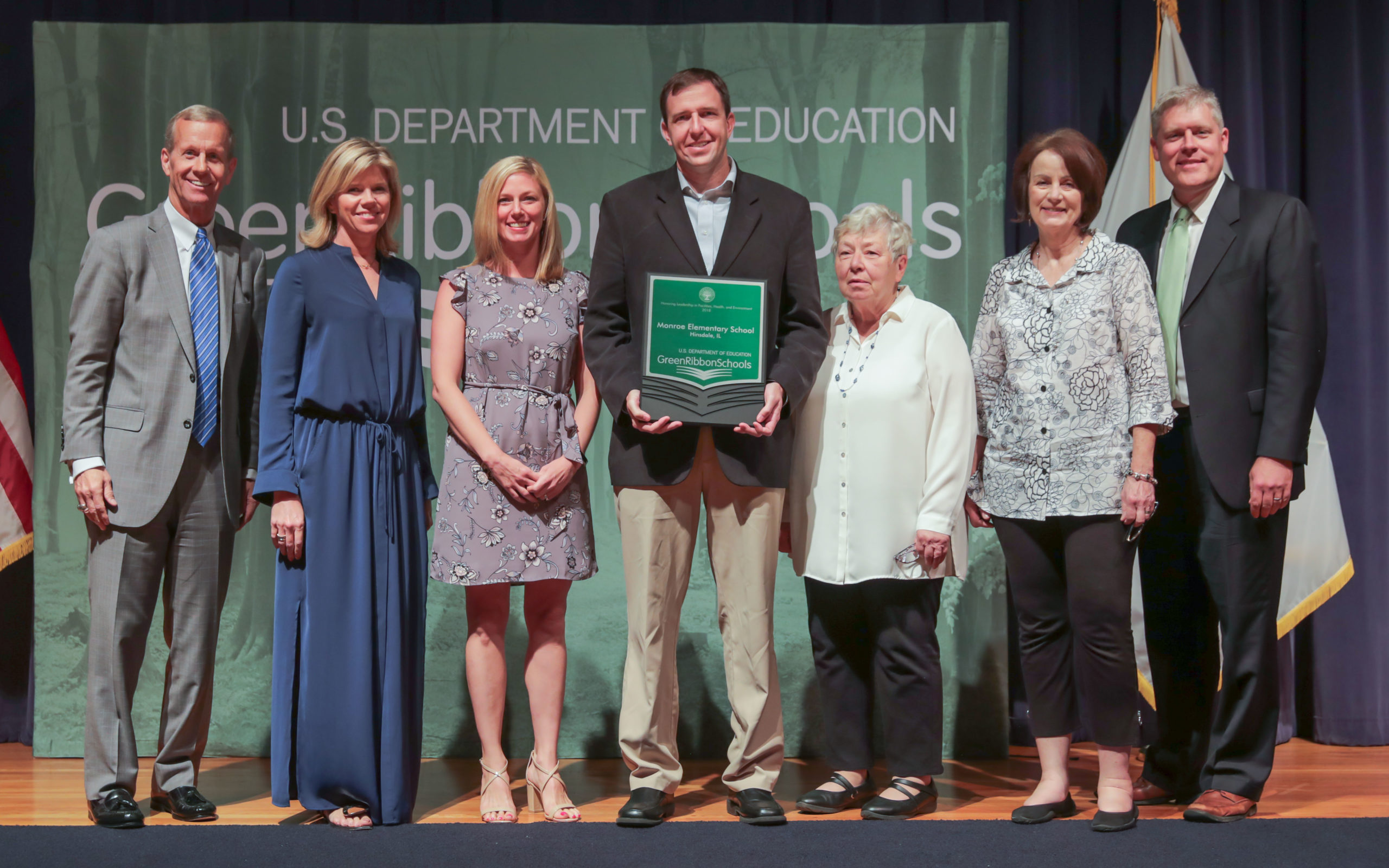